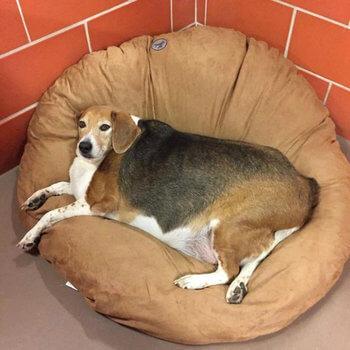 Happy Tails
By One Tail at a TimeAugust 20, 2018No Comments

Where are they now: Kale Chips!

When we met Kale Chips, he was 50 pounds overweight and waiting for rescue at animal control. It’s now been three year’s since this guy’s incredible weight loss journey, but you’ll still find Kale Chips in still tip-top shape and still an internet sensation! We asked his forever family for an update, and here’s what they told us… Kale Chips is a pretty big deal! How has he adjusted to the celebrity lifestyle?

He’s adjusting to it still. It’s gotten to his head a little so we’ve have to talk about that regularly.  He believes that now since he is famous that everyone at Happy Dog has to listen to him. Well, that’s an issue. He demands to be fed and pet all the time.  His preference is that he be served instead of having to move for a treat.  When he wants to be left alone, he has no problem voicing his displeasure. Everyone has to be at his beck and call which he enjoys. The staff, they’re getting used to it. He’s a real diva.

What does a day in the life of Kale Chips looks like?

On a day he has to work he usually wakes up around 8am, drinks a gallon of water ( it’s his new health kick since he’s become famous. He says that his physique has to be perfect for pictures and that requires a lot of water.) then he eats, goes outside and stalks the neighborhood squirrels as he likes to show them who is boss. Car rides are rough. He thinks everyone is out to take his picture. So he has to be upfront in the passenger seat because famous dogs don’t sit in the back with the others.  He gets to hang out at Happy Dog all day while he barks at customers and dogs and frequently ends up “in the back” so he doesn’t have to interact with them.

On a day off, he prefers to spend his time sleeping, lounging, barking to go outside and rid the yard of squirrels, then back to napping.  He has some lingering pain so off days are best used for quiet time.

If Kale Chips could only take one treat on a desert island, what would it be?

Kale would take Tremenda chewy-bulls because those are his absolute favorite and he steals them at every chance. He couldn’t just take one treat though. Honestly that’s not even something Kale can comprehend. One treat? What is this? He’s famous now. He believes he can take everything he wants which would be bags of those chews and everything in the entire bakery.

“Guys, just because I’m famous doesn’t mean I’ve changed. I’m still a lovable goof who enjoys belly rubs on my own terms. Now I get to enjoy everything I could possibly want all the time. Moms cut me off and won’t give me her credit card information. I guess ordering a new double mattress was the tipping point? But whatever. I love hearing my name (only when it’s for something good not for when I get caught stealing) and enjoy the catwalk Happy Dog has provided me. I enjoy “strutting my stuff” when the floor staff calls my name to introduce me to a fan. Follow me on Instagram to see what I’m up to at work and with my new found fame.”